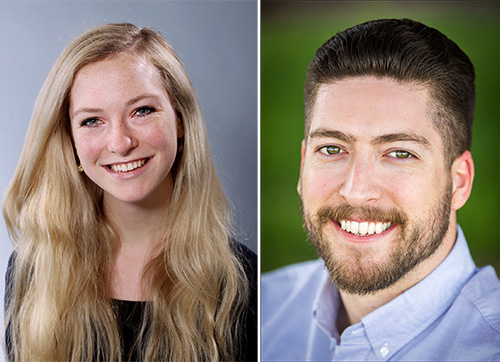 Alicia Magann, a Department of Energy Computational Science Graduate Fellowship (DOE CSGF) alumna (2017-2021), will focus her research on exploring the possibilities of quantum control in the era of quantum computing, an extension of her doctoral thesis work at Princeton University.

Magann wants to study how lasers could be used to control systems that operate under the strange quantum physics that dominate at the tiniest scales. Quantum control questions are so difficult, however, that they require quantum computers, still in their infancy, to explore them. Magann will work with Mohan Sarovar, her advisor for her 2019 DOE CSGF practicum. After her stay, Magann continued as a year-round, part-time remote intern and did a second practicum in 2020. She was featured in a recent episode of the Krell-produced Science in Parallel podcast and in the 2021-22 issue of DEIXIS Magazine.

During his Sandia internships, Shipley led 75 shots on Mykonos, a pulsed-power device, and seven shots on the lab’s potent Z pulsed-power machine. He made contributions to magnetized liner inertial fusion experiments that use its magnetic fields to crush a capsule of hydrogen isotopes, merging their atomic nuclei and releasing energy. The instabilities he will study can weaken the pressure punch Z exerts.

Shipley was the cover story subject for the 2021-22 issue of the Krell-produced Stewardship Science magazine.

Truman Fellows are appointed for three years and encouraged to pursue their own research ideas across laboratory groups and departments. They receive full pay and benefits.