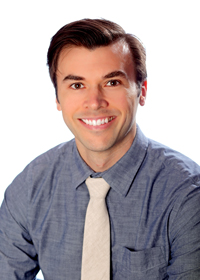 Nathan Finney never expected to be a full-time researcher. By 2015, he’d spent several fulfilling years teaching physics, math, engineering, skateboarding, and art to kids in grades 7 through 12 at New York City’s Columbia Secondary School. In the evenings, he took graduate-level science courses, and he spent summers working on research projects in the Columbia University laboratory of mechanical engineer James Hone.

Finney soon realized that a Ph.D. was an option. “It was a difficult decision. I was happy with my job,” he recalls, but the opportunity to work in a top lab in an exciting, emerging field was too good to pass up. At Columbia, Finney studies twistable electronics – layered nanoscale systems in which the electronic response changes as one sheet is rotated relative to the others. Until recently, however, researchers couldn’t easily turn single atomic layers relative to each other within a device. “It’s very difficult to do science where the twist angle between atomically thin crystals is your independent variable,” Finney says.

Last year in the journal Science, Finney’s Columbia colleagues described a three-layer device built with insulating boron nitride (BN) and conducting graphene, an atom-thick layer of bonded carbon, topped with a layer of BN shaped like a gear. Using the tip of an atomic-force microscope (AFM), they pushed this top disk relative to the slightly misaligned layers below and studied the device’s electronic response. “The ability to dynamically rotate layered crystals in a single device opened the door to really understand complicated twistable systems,” Finney says.

BN and graphene both have honeycomb-like hexagonal patterns or lattices of atoms that are almost the same size (2.5 and 2.46 Angstroms, respectively). Just as when light shines through two bigger, partly transparent geometric patterns, the combination at the nanoscale creates a larger interference pattern, known as a moiré superlattice. Finney has aligned the bottom two layers of BN and graphene and then rotated the top BN layer relative to the lower ones. That twisting alters the overall symmetry in the device and can tune its electronic response. When all three layers are perfectly aligned, the combined interference pattern enhances the bandgap of this system – the difference between two allowed ranges of electron energy in a solid – to 60 meV, more than half that of the semiconductor silicon. When the top layer is rotated 60 degrees, the gaps are suppressed to less than 20 meV, nudging the material toward metallic behavior.

This platform could eventually help researchers develop mechanically tunable devices that change their electrical properties when exposed to light in the far-infrared spectrum, Finney notes. These photodiodes could be useful for astronomy, medicine and search and rescue. If researchers can swap an AFM tip’s nudge for electromagnetic force, these tiny electronics could use their own feedback for real-time adjustments.

Finney completed his practicum in 2016 with Marcus Worsley at Lawrence Livermore National Laboratory, where he studied techniques for making graphene aerogels, which are low-density solids. He expects to graduate in 2020 and is exploring a range of postdoctoral research options.