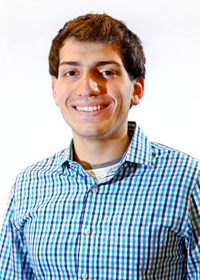 As a youth in his native Brazil, Fabio Iunes Sanches says, there was an expectation that if someone is good in math, they would become an engineer.

Sanches, now a doctoral candidate at the University of California, Berkeley, fit the profile. His father also is an automotive engineer who took a job with General Motors, moving the family to Michigan when Sanches was in high school.

But by middle school, Sanches had decided engineering wasn't his destiny. A physics class instead attracted him to exploring the fundamental principles governing the universe. "And very quickly I realized I wanted to be a theoretical physicist because I enjoyed more of the pen and paper calculations rather than doing experiments," says Sanches, a Department of Energy National Nuclear Security Administration Stewardship Science Graduate Fellowship (DOE NNSA SSGF) recipient.

It's no wonder, then, that he now wrestles with gnarly high-energy physics concepts. "I realized I wanted to understand everything as fundamentally as possible and, naturally, as you go in this direction of higher and higher energies, the math gets more and more interesting," Sanches says. The field gives him the freedom to explore multiple concepts and projects.

In his thesis work, Sanches considers how locality relates to gravity. Locality arises from a principle of Albert Einstein's Theory of Special Relativity: Nothing moves faster than light, limiting communication between two points. "Locality essentially says things should only be affected by what can communicate with them." But at the same time, quantum physics says an electron can be in superposition, simultaneously occupying two points in space. The notion of quantum fields unites these concepts and explains all particle interactions - except for gravity.

These rules apply to the Standard Model, which describes all particles, such as electrons and quarks. Under the Standard Model, it's generally clear where a particle, such as an electron, is in space-time - the union of time and three-dimensional space in a four-dimensional continuum. "But as soon as we try to include the gravitational interactions, saying where something is in space-time becomes more complicated," Sanches says. Quantum physics has to consider superpositions when describing space-time, but gravity makes it difficult to determine if a point or event is in the past, in the future or connected to another event.

Part of the solution may lie in evidence that gravity is a holographic theory - three-dimensional at its foundation but organized to appear as if there's a fourth dimension. It's similar to a credit card hologram, a three-dimensional image that is just two-dimensional.

Imagine a cylinder, Sanches says. It has two dimensions: circumference and length. "But if you include the interior of the cylinder, now it has a third dimension." Gravity "in all of those three dimensions is secretly only described by a theory that we say lives on the boundary of that cylinder, which is the circle and the long side, the time direction."

It's strange, Sanches says, because "if there's gravity, then inside the cylinder I can imagine objects being there," such as black holes, stars or particles. "But if those things are inside the cylinder, how are they secretly only encoded as a hologram on the boundary, which is one dimension lower?" His research with advisor Yasunori Nomura hopes to understand how it's possible for objects to respect locality - "the fact that objects that cannot communicate in the higher dimensional bulk do not affect each other" - if they're encoded in a lower-dimensional boundary.

The research has implications for quantum computing, which uses superposition and entanglement - the capacity for two particles to share quantum correlations even when separated by great distances - to accelerate calculations. Gravity's holographic property may afford a way to correct errors when quantum information is lost in transmission.

Sanches' research ties into the physics of black holes. His 2014 Lawrence Livermore National Laboratory practicum turned directly to the subject. Sanches worked with Peter Anninos to add key physics to the COSMOS++ astrophysics code. These radiative cooling and molecular viscosity qualities are important to modeling accretion discs - matter held by gravity as it rotates around a massive object, especially a black hole. "A lot of the practicum was trying to understand what else we can include in this code and make it more powerful, in the sense that it captures more physical effects," Sanches says. He was able to make significant contributions.

After graduating in May 2018, Sanches plans to pursue a pursue a postdoctoral fellowship as a step toward his dream job as a research professor.

Image caption: Illustration of gravity's holographic property. The gravitational space-time is the three-dimensional interior of the cylinder and various objects can live there: particles, black holes, etc. Nevertheless, all information about the space-time and any excitations living on that space-time is encoded on the two-dimensional boundary. This encoding, however, is nonlocal - that is, local objects in the bulk will have a redundant boundary description that spreads over large regions. Image courtesy of Fabio Iunes Sanches.