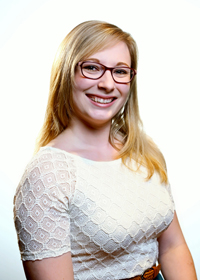 Growing up near the Three Mile Island plant in Pennsylvania, Department of Energy National Nuclear Security Agency Stewardship Science Graduate Fellowship (DOE NNSA SSGF) recipient Erin Good always was aware of nuclear energy and became ever more interested in the science behind it. For her graduate research, she pursued nuclear astrophysics, particularly the processes in novae – stellar explosions that occur as a white dwarf star accretes matter from a nearby companion star and becomes hotter and denser. The explosions produce detectible light bursts that take thousands to millions of years to reach Earth observers, who analyze them for clues to the elements cooked in these stellar furnaces.

On Earth, nuclear astrophysicists model stellar fission with computer codes, but simulations require experimental data. When Good entered Catherine Deibel’s Louisiana State University group in 2014, she joined the effort to move a massive Enge split-pole spectrograph from Yale University to Florida State University’s John D. Fox Superconducting Linear Accelerator Laboratory. Good refurbished the instrument’s focal-plane detector and designed and built a silicon detector array, tools that she’s used since then in experiments. Last fall she measured the decay of calcium isotopes via proton emission. The ratio of protons detected over the total number of times an isotopic state is populated, or branching ratio, allows her to determine how quickly decay is happening and whether it occurs solely from protons or involves other mechanisms such as gamma rays.

During her 2017 Lawrence Livermore National Laboratory (LLNL) practicum, Good analyzed data from beta- and gamma-ray spectroscopy experiments of yttrium-96, rubidium-92 and other isotopes to pinpoint their beta decay. These processes are implicated in the antineutrino anomaly, a difference between the measured and expected flux of these particles. Scientists are still trying to explain whether this discrepancy points to measurement problems or a novel type of antineutrino. She continues to work on the problem with LLNL colleagues and LSU professor Scott Marley.

This article also appears in the 2020-21 issue of Stewardship Science, The SSGF/LRGF Magazine.