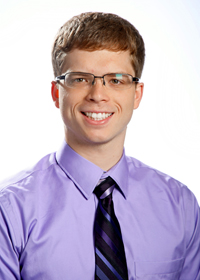 Cody Dennett now designs testing strategies at the Massachusetts Institute of Technology for materials used under extreme conditions, but carpentry and handyman work with his father in small-town Maine shaped his career path. “Those skills, building systems and testing things, have been almost as important as the technical education,” he says. While a Cornell University undergraduate, he employed these abilities installing and evaluating a new system to measure how materials performed in the university’s synchrotron X-ray source.

A senior-year course convinced Dennett that nuclear energy would be a key part of a sustainable energy mix. As he considered graduate studies, one of his professors told Dennett about the need for advanced materials that can withstand the extreme conditions in nuclear reactors.

Most operating nuclear plants in the United States were developed half a century ago. However, the high radiation, temperatures and pressures, plus the effects of corrosive fluids, stretch the ability of many materials to perform safely for decades. Most dramatically, years of service can alter the shape and length of stainless steel components by tens of percentage points. “Just from an engineering standpoint, that’s hugely detrimental,” Dennett says. Maintaining nuclear reactors requires understanding material degradation and employing materials immune to the most severe damage.

Testing materials in these extreme environments, however, is slow and costly. Researchers commonly expose substances to radiation, wait for any activated isotopes to dissipate, and destroy them to understand properties and performance. The process can take years. In his Ph.D. research with Michael Short at MIT, Dennett has developed a non-destructive approach that examines material performance in real time using ion beam irradiation, which blasts materials with charged particles. Researchers can now observe changes continuously, replacing months or years of testing with a single day of experiments. If scientists adopt this faster testing strategy, they could explore a larger range of new reactor materials.

One critical piece of this research has been designing and constructing the online ion beam irradiation test facility, a challenge smoothed by Dennett’s fellowship. Materials scientist Khalid Hattar at Sandia National Laboratories in New Mexico learned of the research and asked Dennett if he’d like to build the proposed facility within Sandia’s Ion Beam Laboratory. “Making that connection was really, really key to the work,” he says.

Dennett spent his 2017 practicum at Sandia and has returned every few months to test materials. He and his Sandia colleagues are currently testing new alloys from other national laboratories, providing complementary results to other assay strategies. Dennett appreciates the national labs’ collaborative environment and the dedicated staff that keep facilities he relies on running. After graduation, he hopes to broaden his work on testing materials as a postdoctoral associate at one of the DOE laboratories. In that environment, he says, “there’s a lot of good work to be done that I think I can do quickly.”