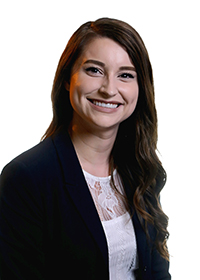 Brooklyn Noble had an early passion for science, encouraged in part by her mother. They were together a few years ago when Noble realized a childhood dream: touring the CERN supercollider in Switzerland. Her mother, Noble says, “is not a scientist, but she loved it because I loved it.”

Noble first learned about tribology – the study of wear, friction and lubrication – in a University of Utah undergraduate course with her future Ph.D. advisor, Bart Raeymaekers. Much of how materials interact with their environment depends on their surfaces. Researchers might find that a material has interesting bulk properties, such as conductivity, formability, or stiffness, but wears easily, she notes. Adding a surface coating could make that material more durable without altering other desired features.

Noble soon became fascinated with understanding surfaces and how they could be changed. As an undergraduate, she worked with Raeymaekers to study ultrathin lubricating films in collaboration with computer hard disk-drive maker Western Digital. Hard drives require atomically smooth surfaces, a quality that involves this type of exact engineering.

As a Ph.D. student, Noble has focused on broader tribology questions. She uses molecular dynamics computer simulations to calculate materials’ atomic-level surface properties and study how they interact with their environments. “My day-to-day question is digging deeper: well, why did that happen?” she says.

Tribology is filled with conflicting results, in which one group’s observations seem at odds with another’s. Noble thinks these apparent discrepancies are linked to design differences, such as the temperature or scale of the experiments, rather than errors. She focuses on explaining what’s happening at an atomic level.

In a recent paper in the journal Nanotechnology, Noble recounts modeling nanoscale surface textures and how polymer-based liquids spread across those textures, describing the roles of pressure and how polymer molecules tangle with each other.

These fundamental insights could help with various precision design problems. In addition to hard drives, ultrathin polymer films could coat medical devices, preventing bacteria from sticking to them and growing. If researchers could design strong, atomically thin coatings that resist wear, they could develop and build nanoscale motors.

For her 2016 practicum at Lawrence Livermore National Laboratory, Noble took her molecular dynamics simulations skills and applied them to a different problem: understanding strongly coupled plasmas. These dense ionized gas clouds – found in astrophysical bodies and inertial confinement fusion experiments – transport energy differently from other plasma types. Noble used molecular dynamics to model the flow behavior, or viscosity, in these systems. Noble enjoyed the teamwork at Livermore and would like to work at a national lab after graduation. “All the resources there were incredible. The supercomputers, the environment, and the people were really amazing,” she says.