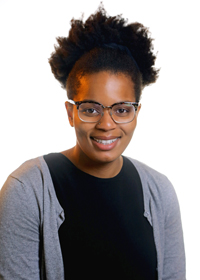 The posts describe Simpson’s early participation in MIT’s Summer Research Program, which gives students from underrepresented groups a taste of graduate-level work. The project, with professors Lindley Winslow and Janet Conrad, “put it into my mind subconsciously that MIT was a place for me, that I could do science and be accepted in this space,” Simpson says in the article.

Simpson went on to earn a bachelor’s degree from Columbia University and to work with Winslow on developing a neutrino detector and to work on astrophysics experiments at Los Alamos National Laboratory.

Her experience with the summer research program prompted Simpson to apply to MIT. It also encouraged her that another woman of color, Mareena Robinson Snowden, also was in the program. Robinson Snowden later was chosen for the DOE NNSA Stewardship Science Graduate Fellowship, the LRGF’s sister program.