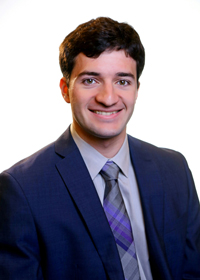 The vast topic of Zachary Weiner’s doctoral research – the origins of the universe – can be awe-inspiring. But the Department of Energy Computational Science Graduate Fellowship (DOE CSGF) recipient’s early impression of a “grand mission uncovering cosmological history” has matured into a deeper, more exciting interest.

“You get into it and it’s cool for totally different reasons,” says Weiner, now a doctoral candidate at the University of Illinois at Urbana-Champaign. He likes “taking physics that’s really remote, that lies beyond anything we’ll be able to ever test” on Earth and considering “the connection between the particle physics that underlies almost everything and gravity as it was happening in the early universe.”

With Peter Adshead, Weiner uses computer models to explore the fleeting but key events preceding the Big Bang and how they may affect explanations of how the universe’s contents came into existence.

There’s much to unpack. Observations largely support the Big Bang model, which says the universe was extraordinarily hot and dense before blowing up and swelling over the course of 13.8 billion years to today’s universe. But it doesn’t explain everything. To account for those differences, physicists postulated that a phase of accelerated expansion – in the tiny span of 10-34 seconds – enlarged the universe before the Big Bang.

Inflation, as it’s called, explains why the cosmos is nearly homogeneous – at nearly identical temperature everywhere in the sky as seen from Earth – but is deficient in other areas. “It lacks a way for anything to be in the universe,” Weiner says, adding “it’s not really great when you want to have particles that make stars and people and puppies.”

Weiner’s models focus on how the homogeneous energy driving inflation subsequently fueled particle production that reheats the universe, setting the stage for the eventual synthesis of light elements such as hydrogen and helium. He specifically studies preheating, an initial, nonlinear phase of violent particle creation.

“With that extremely quick, extremely large amount of particle production you can get a significant background” of random gravitational waves, Weiner says. His codes predict how the spectra of those waves – which are virtually undetectable from Earth – appear under different conditions, providing information that constrains early-universe models. His calculations test whether specific models of the underlying particle physics viably reheat the universe.

These questions have occupied Weiner since his undergraduate studies at Kenyon College in Ohio. He began doing research with Tom Giblin, a physics professor who worked on the inflation problem with Adshead. It was natural for Weiner to move to Illinois and continue the project – and the collaboration – in graduate school.

The interactions are complex, demanding high-performance computing. Weiner first adapted existing codes to run on graphics processing units (GPUs), calculation-accelerating cousins to video-game chips. A class in languages and abstractions in high-performance computing (HPC) led him to rewrite his program using an open-source code-generation framework the professor, Andreas Klöckner, created. The program now runs on a range of HPC architectures with little trouble.

Weiner looked at a bigger and later version of the universe for his 2018 Argonne National Laboratory practicum. Working in cosmology researcher Salman Habib’s group, he examined how the distribution of energy density fluctuations might have influenced the universe’s large-scale structure.

Most simulations of the universe’s structural evolution assume the energy density distribution is Gaussian – following a normal, bell-shaped curve. But these seeds for structure formation are predicted to be more complicated in some inflationary models. An upcoming NASA probe, SPHEREx, will survey hundreds of millions of galaxies, helping closely measure the inflationary fluctuation distribution. Habib’s group, including DOE CSGF alumnus Nicholas Frontiere, wants to incorporate non-Gaussian initial distributions into its cosmological code as it prepares to analyze SPHEREx data. Weiner took the first steps toward generating these distributions during his summer stay.

With graduation planned for spring 2021, Weiner is eyeing postdoctoral research positions and fellowships. Meanwhile, he’ll continue to mentor undergraduate and younger graduate students, an interest he picked up at Kenyon, where he directed a science outreach program for middle school students.

That experience gave Weiner the desire to build a more inclusive, diverse and equitable scientific community. “It starts with being supportive,” he says. At Illinois, “we have a really phenomenal graduate student community and I’m a glad to at least play a part and to make connections that promote that support.”