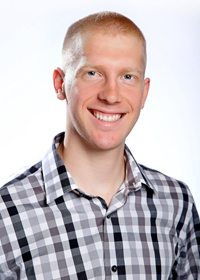 Thomas Ludwig first thought graduate school would be stationary: five years working at Stanford University. Instead, the Department of Energy Computational Science Graduate Fellowship (DOE CSGF) recipient did a summer practicum at Argonne National Laboratory near Chicago and later spent three months working with collaborators in Denmark. He enjoyed exploring the local culture and experiencing the winter solstice at a far northern latitude. It’s not just that the days are short, he says. “At noon, your shadow is 30 feet long. The sun just stays so low in the sky.”

Ludwig’s first coding experience was in an advanced placement computer science course at his Ohio high school. That led him to a computer-based honors course , now known as the Randall Research Scholars Program, at the University of Alabama. “They put you into a first-year class where you learn a couple different programming languages and do projects,” he says.

At Alabama, Ludwig struggled to choose from his interests in math, physics, chemistry and biology but finally majored in chemical engineering. Working with professor Heath Turner, he used his computational skills to study interactions between ionic liquids and layered materials.

For his Stanford graduate research with Jens Nørskov, Ludwig works to improve catalysis – the process of controlling chemical reactions and making them more efficient. The research is important for industry and for applications such as sustainable energy.

Ludwig started with the problem of using electrochemistry to convert carbon dioxide into fuels and chemicals. Researchers are still trying to piece together how the solvent or electrolytes used in these chemical reactions affect the speed and mix of products. Modeling such systems requires incorporating solids and liquids while a carbon dioxide molecule is chemically reduced on a metal surface. The research requires computationally expensive quantum mechanical models and sampling many chemical configurations.

Ludwig has been streamlining the sampling process so the researchers can run these expensive calculations on molecular arrangements most amenable to the method. That led him to consider how to improve representing interfaces between solids and liquids, leading to his 2018 Argonne practicum with Juan de Pablo.

Even in sophisticated quantum mechanics simulations, researchers often approximate how heat affects a chemical system’s energy, Ludwig says. Scientists assume that the chemical bonds vibrate like a harmonic oscillator, often described as a ball on a spring. “It’s not immediately clear that will be a good approximation when there are solvents present or in electrolyte environments,” he says. So he’s coupled a more realistic sampling method, adaptive biasing force, to quantum mechanical calculations that use the density functional theory modeling method. “This approach is a step forward in understanding increasingly complex reactions on metal surfaces,” Ludwig says. The researchers initially focused on the dissociation of molecular nitrogen (N2) on the surface of ruthenium metal, a critical step in fertilizer production.

Ludwig continues to work on both of these projects and has used DOE computing resources at the National Energy Research Scientific Computing Center in Berkeley, California, and at Argonne. He’s also interested in general questions about how electrolytes interact with catalysts and electrode surfaces, particularly what happens in electrolytes in solvents other than water. “There hasn’t been an enormous amount of theoretical work” on the subject, he says, but these solutions can alter conditions such as acidity, conductivity and electrochemical stability. They can interact even with electrodes or other molecules in ways that speed desired reactions and suppress unwanted ones.

Ludwig expects to graduate in 2021 and continue doing research in industry, in academia or at a national lab. The DOE CSGF practicum, with the opportunity to work on a new research question, has shaped his career and his confidence. The opportunity to explore catalysis problems using both a more conventional approach and through free energy calculations, Ludwig says, has been incredibly useful as he thinks about new ideas and methods for solving these problems.