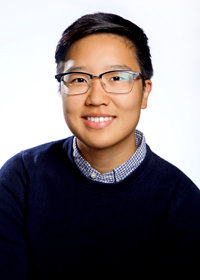 Sukin Sim designs and analyzes algorithms and processors for quantum computing, a choice that she and her father find ironic.

As a child, Sim (who also uses the first name Hannah) found her father’s work designing and analyzing computer processors boring. “I told him that I would never do what he does,” the Department of Energy Computational Science Graduate Fellowship (DOE CSGF) recipient recalls. But now, “he says the joke is on me.”

Sim arrived at computational science via chemistry, an area that combined her interest in hands-on work with mathematics. A paragraph describing the field of computational chemistry in one of her high school textbooks planted the seed: It was intriguing to think that computers could help researchers understand what was happening to molecules in beakers.

At Wellesley College, she researched peptides with Donald Elmore and DOE CSGF alumna Mala Radhakrishnan, using computation and experiments to explore how certain classes of these protein-like structures interact with the genetic material in microbes and blocked their activity. Using molecular dynamics simulations in that project helped Sim realize that specific applications interested her less than the idea of building up a computational model to study physical phenomena. That led her to tweak her degree plan, switching from chemistry to an individualized major in chemical physics that combined chemistry, physics, math and computer science courses.

A summer 2015 networking dinner at the American Chemical Society meeting in Boston shaped Sim’s graduate career. She met Alán Aspuru-Guzik, whose group studies theoretical chemistry, machine learning and quantum computing and where those fields intersect. (Aspuru-Guzik was at Harvard University but moved to the University of Toronto in 2018.) She also spoke with DOE CSGF alumnus Jeff Hammond of Intel, who described the fellowship’s broad program of study and practicum requirement. “This is exactly what I want to do,” she thought. “I wanted to take those courses anyway.”

Sim joined Aspuru-Guzik’s group in 2016 but found the diversity of available research projects overwhelming. “I was interested in everything and was a little bit worried about picking the right direction for me,” she says. Quantum computing interested Sim, but she had no background in that field. So she set up a 2017 Lawrence Berkeley National Laboratory practicum with DOE CSGF alumnus Jarrod McClean, a former student in Aspuru-Guzik’s lab who was a postdoctoral fellow at the time. (He’s now a Google research scientist.) McClean helped invent an influential algorithm, the variational quantum eigensolver, for current and near-term quantum computers, which are small and produce results clouded by statistical noise.

Sim worked with McClean on characterizing methods to estimate the ground state – the lowest energy level – of particular molecules and developed approaches to better assess the various mathematical starting points used to solve these problems. The methods have applications beyond chemistry: They can be used to analyze and improve near-term quantum algorithms that involve finding a maximum or minimum value amid a sea of possibilities.

The summer stint launched Sim’s quantum computing work. At Harvard, she develops circuit designs and algorithms for near-term quantum computers. In a recent Advanced Quantum Technologies paper, she described a metric called expressibility, a way of describing the number of potential pathways a quantum circuit can use to find a molecule’s ground state. Some circuits might have a very restricted set of states they can explore, while others might be more expressive. Understanding these features could help scientists design and scale up experiments on near-term quantum computers, she says.

Ultimately, Sim is trying to learn if quantum computers can offer advantages for particular tasks and how to develop useful algorithms. In the near term, she’s focused on leveraging today’s quantum machines to provide useful results.

Besides her graduate work, Sim has interned at Zapata Computing, a startup quantum software company that spun off from her Harvard lab. From that experience, she’s become increasingly interested in science outreach and in encouraging and supporting a diverse and sustainable employment culture in quantum computing, particularly for women. She plans to pursue a research position in industry after completing her Ph.D. in 2020.

Image caption: Sukin Sim designs and analyzes quantum algorithms and circuits. In a recent paper, she described expressibility, a way of quantifying the potential paths a quantum circuit can use to find a molecule’s lowest energy level or ground state. In this image, each sphere represents all possible states of a single quantum bit, and each dark point represents a quantum state accessible using the circuit shown above the corresponding sphere. Low expressibility circuits (left) have points that are less spread out while circuits with high expressibility (right) have points that cover the sphere uniformly. Expressibility can be generalized to study and characterize quantum circuits with larger numbers of quantum bits. Credit: Sukin Sim, Peter D. Johnson, Alán Aspuru-Guzik, Advanced Quantum Technologies. 2019. 10.1002/qute.201900070. Copyright Wiley-VCH Verlag GmbH & Co. KGaA. Reproduced with permission.