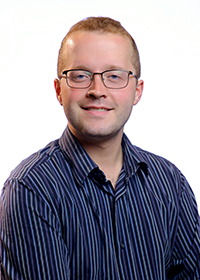 At first, Sean Marks was frustrated with his computer model, which was meant to simulate water molecules as they link into ice crystals on a solid surface. In his animations, the molecules danced, tugging back and forth between interacting with the substrate and their neighboring water molecules. But they refused to settle down.

“Crystal nucleation can be tricky, even when you attempt to utilize sophisticated simulation techniques,” Marks says. “In my very first simulations, I got pretty good at making vapor.”

Marks’s ice-nucleation studies were a new direction for his advisor’s team. Marks, a Department of Energy Computational Science Graduate Fellowship (DOE CSGF) recipient, joined Amish Patel’s University of Pennsylvania lab in 2015. Patel and his group had mainly studied how liquid water interacts with materials ranging from hydrophobic – water-repelling – coatings to proteins. They’re experts in molecular dynamics (MD) calculations, which simulate chemical systems down to the level of atoms and molecules.

Patel was interested in ice nucleation and antifreeze proteins (AFPs), naturally occurring molecules that are key to winter survival for many insects, fish and other organisms. AFPs in their cells stunt crystal growth, helping them survive.

Scientists think AFPs could lead to lifesaving and cost-reducing advances, such as ice-repelling aircraft wings and improved storage of transplant organs. Commercial antifreezes prevent nucleation by running interference among water molecules and work best in concentrations of 20 to 50 percent by weight. AFPs are effective at concentrations of less than 1 percent by – somehow – binding directly to tiny ice crystals and preventing their growth.

Other research groups had performed MD simulations of ice nucleation and some basics were known. Marks wanted to see molecules link and use his calculations to determine how ice-friendly various surfaces are. He coined the terms icephilic and icephobic, borrowing suffixes from hydrophilic and hydrophobic, to describe surfaces that are, respectively, more hospitable or less hospitable to ice nucleation.

First, he had to learn how his simulation could distinguish between ice and liquid water. The two are chemically identical, and since individual water molecules interact strongly, even as a liquid two or more will temporarily form locally ice-like structures. He found that viewing a single molecule and its immediate neighbors plus those one step farther away reveals whether the structure is highly ordered (ice) or relatively disordered (liquid).

Next, he had to induce ice formation on the appropriate time scale. MD yields details down to the level of atoms but can simulate activity lasting only nanoseconds at a time. Ice nuclei take much longer to form spontaneously. Marks introduced a bias, loading the dice in favor of nucleation, and now the simulated ice forms within nanoseconds.

The bias also leads to an important icephilicity measure. “In the language of thermodynamics, this is expressed as the free-energy cost of forming a sufficiently large ice nucleus,” he says. Icephilic surfaces lower the cost and therefore exhibit shorter nucleation wait times. By measuring the system’s response to the bias, he can compute the free-energy cost of growing the ice – a quantitative and robust measure of icephilicity.

By summer 2018, Marks could trigger ice nucleation at will. “To be able to watch movies that I create, of order forming from complete disorder, that’s really cool,” he says, no pun intended.

Marks has used the simulation to study longstanding questions. For example, researchers have speculated that the key to ice nucleation is a surface whose hydrogen-binding sites have the same spacing as those of an ice crystal. To test this lattice-matching hypothesis, Marks simulated model surfaces based on the most icephilic surface possible: ice itself.

“If lattice-matching were the end-all be-all, then I could do all kinds of things to this surface, and it would still nucleate ice readily,” he says. But it didn’t. When the forces were equal to those of real ice, crystals formed. But when Marks reduced the forces, they formed slowly or not at all. When he cranked up the forces, water molecules piled onto the surface without adopting an ice structure.

For his practicum, Marks went to Los Alamos National Laboratory, where he worked with Angel Garcia, director of the Center for Nonlinear Studies. “To be able to peek inside Angel’s brain, as well as those of his postdocs, was a real treat,” Marks says.

Marks’s recent studies have focused more narrowly on how AFPs interact with water molecules. He’s eager to discuss results but frustrated that he can’t, as they’re yet to be made public. “Keep an eye on our group’s publications, because cool things are coming soon.”

A longer version of this article appears in the 2020-21 issue of DEIXIS, The DOE CSGF Annual.