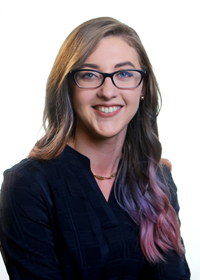 When Sarah Elliott arrived at Argonne National Laboratory for her 2017 practicum, she thought that modeling combustion reactions would be an interesting, but short, detour from her Ph.D. research at the University of Georgia.

But by the end of the summer, “I just fell in love with the project,” says Elliott, a Department of Energy Computational Science Graduate Fellowship (DOE CSGF) recipient. Combustion is such a direct, important application, she adds, and the field needs robust computational tools.

Elliott soon shifted her focus from modeling chemical reactions in the atmosphere to modeling them in burning fuels. Her Ph.D. research combines the quantum chemistry methods her University of Georgia group developed to examine molecules’ electronic structure with Argonne-developed techniques for modeling thermochemistry – the heat energy connected with reactions. Though computational chemists have made great strides in each of these fields over the years, Elliott says, “they haven’t really communicated with each other that well.” This fall she’ll return to Argonne for her third practicum there.

This wasn’t the first time that a summer research project reoriented Elliott’s science perspective. As an undergraduate at Bethel University in Minnesota, she struggled to choose among possible majors in math, physics and chemistry. At one point she considered dropping her chemistry major; the real-life applications fascinated her, but mixing chemicals in labs felt formulaic, like following a recipe.

Considering her interests in math and physics, her advisor sent her to talk with a quantum chemist, who recommended her for a summer research program with Henry Schaefer at the University of Georgia. Soon Elliott was driving south, where she would discover an interest in both programming and computational quantum chemistry. At Bethel, she settled on a double major in chemistry and physics and a minor in math. She returned to Georgia for a second summer and started her Ph.D. in Schaefer’s lab just a week after completing her undergraduate degree in 2015.

Elliott applied for the DOE CSGF because of its focus on interdisciplinary training in math and computer science. “When you're an undergrad and going on to grad school, everyone is telling you that you have to become more niche and more niche,” she says. As a self-taught programmer, the program of study’s coursework in math and computer science gave her the training and confidence to incorporate numerical methods into her code and to use new techniques and algorithms in her research.

Schaefer’s group primarily focuses on modeling the location and behavior of subatomic particles of molecules found in the atmosphere. Before Elliott’s first practicum, she had described the behavior of a free radical species in the atmosphere, a system that resembles combustion but at much lower temperatures. Since changing her focus, she has trained her University of Georgia colleagues in the thermochemistry methods she learned at Argonne. After three years, they’re nearing their goal: a simulator into which engineers can plug information about an engine design, fluid flow patterns and a fuel, then generate predicted combustion products, reaction rates and heat capacities (a measure of how various molecules absorb thermal energy).

In May, Elliott presented the work at the 17th International Conference on Numerical Combustion in Aachen, Germany. Engineers at the meeting were impressed with her team’s results, she says. Designers have been using fairly rough approximations of combustion chemistry to devise engines, in part because they didn’t believe it was possible to simulate these reactions efficiently and accurately. “The fact that they were really excited about [these tools] just justifies what we've been doing all this time,” she says.

Elliott is interested in more than improving combustion engine efficiency. She also hopes to use these models to track byproducts, such as carbon monoxide, carbon dioxide, and sulfur and nitrogen oxides. These molecules can harm human health or redistribute the atmospheric mix of chemical species, affecting global climate. The methods also can predict unexpected hazardous byproducts before they are generated in a lab.

Elliott hasn’t ruled out the possibility of an academic postdoctoral research post after graduation in 2020, but she expects to pursue a research career at a DOE lab. Besides combustion, she also fell in love with the atmosphere during her time at Argonne.

“It's very collaborative,” she says. “You're doing interesting science but with long-term goals that are useful to people.