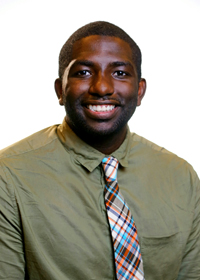 Quentarius Moore almost left chemistry after finishing his undergraduate degree in the subject at Mississippi’s Jackson State University. His initial graduate school plans for chemical engineering hadn’t worked out, and his grandmother had died earlier that year. Moore was working that summer in his grandfather’s concrete-finishing business when a friend and Jackson State mentor encouraged him to come back to pursue a master’s degree, saying “just see what happens.”

Moore met Batteas at a 2016 research conference, where Moore described coaxing growth of two-dimensional chemical films in a University of Alabama laboratory while listening to Bruno Mars. Batteas approached Moore after his talk, and the two bonded over music and mutual science interests. That summer Moore visited Texas A&M for several weeks and explored the research in Batteas’ group before applying to the Ph.D. program the next year.

Chemists have looked carefully at how light, heat and electricity affect chemical reactions, Moore says. But “we don’t understand how force alters reaction energy and pathways,” factors that are important as researchers consider solid lubricants. Atomic or nanoscale jagged edges on these slick surfaces can cause wear and tear or make them vulnerable to chemical reactions such as oxidation. The work also has implications for devices that must function in extreme environments, he adds. “If you shoot a satellite into space and you want something to actuate and it doesn’t actuate, that's a big problem.”

Moore studies two-dimensional systems such as graphene, the sheet-like form of carbon. Its surface is known for being relatively inert, but graphene lubricants show some reactivity with wear and tear. Defects that bend the surface out of plane can cause the carbon atoms to react with free-radical molecules. He and the Batteas group also collaborate with Sandia National Laboratories to study molybdenum disulfide (MoS2), another 2-D material, in a project that resulted partly from Moore’s three Sandia practicums with Michael Chandross.

When Moore arrived at Texas A&M, he had only used DFT, a computationally intensive tool that can become too demanding when simulating a large number of atoms. Through his Sandia research, he learned a molecular dynamics method, LAMMPS, that lets researchers probe larger periodic systems such as graphene and MoS2 while including approximations. More recently he’s incorporated plane-wave DFT, a technique that offers advantages of both approaches, into his research.

Moore is the lone computational chemist in a research group focused on using instruments such as atomic-force and scanning-tunneling microscopes to probe chemical surfaces. He eventually hopes to do experiments, too, which would let him gain new insights for his computational work. Artificial intelligence methods, meanwhile, offer an opportunity to glean new materials science insights from the Batteas group’s extensive experimental data sets, he says. The group recently received a $1.8 million National Science Foundation grant to found a center for research, outreach and entrepreneurship focused on mechanochemistry.

Moore has helped with Texas A&M’s annual chemistry open house and he plans to continue that outreach work while building resources for chemistry instruction in his home state of Mississippi. He didn’t have many childhood science role models, he says, and wants future generations to see the full range of such career opportunities.

Moore’s longtime interest in photography and videography could support those projects. While at Jackson State, he freelanced for ESPN, providing video technical support for Division I college football games in Alabama, Mississippi and Louisiana and at Memphis bowl games. Much of the work involved running up and down sidelines and supporting camera operators as they got action shots. He reprised that role for one Texas A&M football game during fall 2019.

Moore plans to graduate by late 2022 and is exploring many research career options. The DOE CSGF program of study was both difficult and rewarding and increased his interest in computer graphics, visualization and statistical techniques, he says. “The CSGF hasn’t narrowed my career choices, but instead blossomed my interests to be more than I ever expected.”