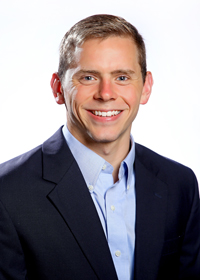 Growing up near San Francisco, Clay Sanders focused on visual arts and music. It was only while studying at Duke University in North Carolina, he says, “that I discovered what cool things computational science and engineering had to offer.”

Sanders entered Duke as a liberal arts major, but a structural analysis course with Mechanical Engineering and Materials Science Professor Wilkins Aquino redirected him. Aquino showed “you could simulate structural behavior using fundamental mathematics and computing concepts from other courses.” The class also demonstrated “how the computing aspect can push the edge of how structures are designed and analyzed.”

Sanders graduated with a civil engineering degree. Now he’s pushing the edge himself as a Duke doctoral candidate in the same subject with a concentration in computational mechanics. Aquino is his thesis advisor. The Department of Energy Computational Science Graduate Fellowship (DOE CSGF) supports Sanders’ research.

Sanders focuses on topology optimization: computational techniques to design a structure with the best possible shape for a particular purpose. With Aquino, he develops numerical methods engineers can use to plan everything from structural components to composite material microstructures.

To demonstrate their methods, Sanders and Aquino compute designs for acoustic cloaks, materials or structures that let sound waves pass without detectable disruption, concealing them from sonar and similar technology. In a January 2018 paper published in the Journal of the Acoustical Society of America, Sanders, Aquino and Timothy Walsh of Sandia National Laboratories, New Mexico, described how their method calculated the material properties necessary to minimally disrupt acoustic waves as they struck a cylinder in water.

The researchers designed the cylinder as a series of concentric rings and determined the best material properties for each so the structure wouldn’t impede an acoustic wave. Their method, partial differential equation (PDE) constrained optimization, uses the formulae governing the problem’s physics to direct calculations to the best solution. They obtain the optimal answer – in this case, the distribution of material to acoustically cloak the cylinder – by first simulating how the structure responds with an initial guess, Sanders says. They calculate how the response changes due to alterations in the structural properties, then “iteratively improve the design, re-simulate its response and hopefully get closer and closer to our structural goal.”

The team’s calculations identified a combination of material properties that cloaked the cylinder over a range of wave frequencies. Although the project didn’t focus on whether such materials exist or can be produced, Sanders says the introduction of additive manufacturing and metamaterials – respectively, three-dimensional printing and combinations of substances that exhibit exotic properties – make this more than just an intellectual exercise. “These types of algorithms leverage well with additive manufacturing so that complex geometries the methods generate can actually be fabricated. That’s how these methods have importance and relevance in advancing engineering design.”

Sanders found applications for his work even before starting his Ph.D. He spent the summer after graduation with Walsh at the Albuquerque lab. Sanders has since worked a few hours a week from North Carolina, helping couple Sierra-SD, the group’s structural dynamics code, with tools to solve design optimization problems. He calls it a “synergistic relationship because I apply things I’m working on in my own research to goals they have for their department.”

Sanders also chose Sandia for his 2017 practicum, working with computer modeler Jeremy Templeton at its California location. Instead of devising algorithms to make parts via additive manufacturing, Sanders used machine learning to model uncertainty in such parts’ properties.

Teaching the networks required generating large amounts of stress-strain training data from deformation simulations, using models with randomized microstructure so the networks could learn to capture material variability. Sanders built and ran hundreds of these simulations with various metal-grain orientations on a Sandia high-performance computer. The practicum work led to a paper in Computer Modeling in Engineering & Sciences.

The experience, Sanders says, will be useful as he completes his doctorate and pursues modeling complex systems and tackling difficult problems at a national laboratory or in industry.

And although it may seem he’s forsaken his artistic pursuits, Sanders disagrees. Optimization algorithms can generate visually pleasing shapes. “It definitely complements my interest in art and aesthetics and design – the combination of solving the hard mathematical problems but obtaining something beautiful.”

Image caption: To design an acoustic cloaking device, Sanders's method selected material properties for a structure so that the pressure field in a surrounding fluid caused by the structure interacting with an incoming wave was identical to that from an unimpeded wave, left. The initial structural guess, center, disrupted the fluid, but the optimized structure, right, allowed for recovery of the targeted pressure field. Credit: Clay Sanders.