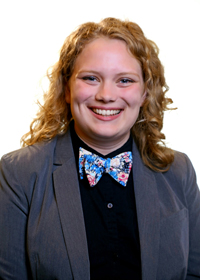 Growing up just a few miles from East Lansing and Michigan State University gave Claire Kopenhafer opportunities to explore her interest in science and technology, including attending a high school nuclear physics camp that changed her life. The camp gave her an appreciation of the universe’s fundamental forces but also introduced her to astronomer Brian O’Shea.

Fast-forward to Kopenhafer’s first year at MSU, when she ran into O’Shea at a “meet your professors” event. “I don’t think he remembered me,” she says, “but he gave me his business card.” With university funding, Kopenhafer worked with O’Shea as an undergraduate research assistant, developing a tool that processed simulation data into mock astronomical observations.

“He’s been my advisor ever since,” says Kopenhafer, now a Department of Energy Computational Science Graduate Fellowship (DOE CSGF) recipient and MSU Ph.D. candidate in astrophysics and computational math, science and engineering. “It worked out really great.”

O’Shea uses computer simulations to understand galaxy evolution and star formation. After a time in his group, “I realized that there are a lot of different aspects you can study” under that subject, Kopenhafer says. “I’ll never get bored because I can work within this same general area and bounce around between these different ways of tackling the problem.”

Kopenhafer studies what leads galaxies to continue or stop producing stars, with a focus on the gas that surrounds each galaxy, called the circumgalactic medium (CGM). Detailed observations are relatively new, Kopenhafer says, so the CGM has become an intensive research subject as astrophysicists seek answers to star-formation puzzles.

Gravity, much of it from the dark matter that dominates the universe, can pull cooling gas in from the otherwise hot CGM. Once in the disk, it condenses and binds into potential star nurseries. Astrophysicists, however, know that star formation is inefficient and think that negative feedback – energy that counters cooling – may be the culprit. Feedback may come from supernovae – exploding stars – or from the black hole at the galaxy core, which dumps prodigious amounts of thermal and kinetic energy into the system.

The theory is well developed but mostly via pen-and-paper calculations, Kopenhafer says. She aims to simulate it.

Kopenhafer also wants to address some of the imprecision in galaxy-evolution and star-formation models. Feedback happens on scales too small to directly capture in galaxy simulations, even though it affects the final prediction. Researchers instead tune parameterized negative feedback models to replicate observations.

“The field at the moment is able to reproduce some things, which is great, but there are others” that are wrong. “We can’t possibly tune parameters to match all of the things at once,” so researchers must address the underlying model. Kopenhafer hopes to target properties that, if added to the feedback model, would produce a better outcome with less tuning. It’s a tall order that she doesn’t expect to fill in a single dissertation.

Kopenhafer also hopes to consider plasmas, hot mixes of electrons and ions, as another feedback factor since learning more about them on her 2019 practicum at Sandia National Laboratories in New Mexico.

Sandia houses the Z machine, a giant device that produces massive, brief electric jolts to generate powerful magnetic fields, pressure and radiation. In one experiment, researchers use Z to convert combinations of materials into plasmas of different densities and take X-ray snapshots of how they mix. Models help decipher the forces involved and design future experiments. Kopenhafer returned to themes of her undergraduate days, creating synthetic X-ray images from simulation data to test different ionization models that capture how Z’s energy removes electrons from the materials’ atoms.

She planned to quantify the uncertainty these models introduce, putting a number on how much scientists can trust the results. By running simulations, each with varying values, and comparing outcomes against observed data, “you start to pin down which parameters or model choices make a better fit for the observed data.”

Kopenhafer chose parameters to vary and their values, but was unable to analyze simulation results before returning to Michigan. She plans to resume the project after pandemic restrictions are lifted.

Kopenhafer aims to graduate in 2022 or 2023 and land an academic position after completing postdoctoral research.