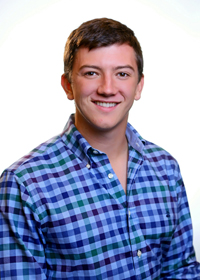 When Benjamin Toms was 15, he talked his mother into taking him out in her van to view his first tornado. “She was getting pelted with golf ball-sized hail,” and was pretty scared, he recalls. “I thought it was a great time.” After he got his driver’s license, his parents let him chase storms all over the plains.

Toms’ weather interests laid the foundation for graduate research at Colorado State University, where he has used machine learning to improve near-term climate predictions. The Department of Energy Computational Science Graduate Fellowship (DOE CSGF) recipient recently completed his degree and is launching a company that will build models to predict climate patterns several years into the future.

As an undergraduate, Toms majored in meteorology and civil engineering at the University of Oklahoma and initially planned for a job assessing damage from severe weather events for insurance companies. But the conceptual side of meteorology drove him toward research, and he did field work in Kansas, helping collect observational data from large thunderstorms. It was interesting, but he realized such knowledge had limits: Watching weather evolve over time required supercomputers and simulation. During a summer internship with the National Institute of Standards and Technology after his sophomore year, Toms studied microscale flows from fires across building structures with DOE CSGF alumnus Randall McDermott. “That got me really excited about supercomputing because I realized that it was something that I could really do.”

Toms started graduate school by researching high-resolution simulations of clouds but saw the potential of machine learning for atmospheric research and wanted to learn more. During his 2018 practicum at Lawrence Berkeley National Laboratory, Toms worked with Karthik Kashinath and Prabhat on using machine learning to analyze atmospheric data and wind and temperature patterns to better understand the Madden-Julian Oscillation, a tropical cloud formation that influences global weather and climate.

The practicum inspired Toms to focus his Ph.D. research, with Colorado State’s Elizabeth Barnes, on machine learning for climate predictions. The work combined existing physical theories about how ocean patterns affect precipitation and temperature patterns and incorporates them into neural networks. “Then we try to understand what the neural network has learned so we can learn something new about the system itself,” Toms says. Simulations from existing climate models provide a wealth of training data. “We have thousands of years of make-believe worlds that look a fair amount like the real world.”

The effort has involved challenging skepticism about machine learning among some geoscientists, Toms notes. As physical scientists, many researchers in that field have questioned the use of neural networks and how they make inferences from data, but he and Barnes wanted to understand what the models were learning. “A lot of my Ph.D. was trying to figure out how to extract meaningful information from these neural networks,” he says.

Toms and Barnes have used this data-driven approach to identify indicators of human-made climate change. They used simulation data to train a neural network and then asked the algorithm to predict real historical climate patterns. The artificial intelligence forecasts matched documented observations, giving them the confidence to forecast conditions. In 1980, for example, climate change began affecting temperatures over Southeast Asia, but their models show that by 2040 its impact will emerge more clearly over North America, Toms says.

Toms and his colleagues are convinced they can predict near-term climate – up to several years into the future – with machine learning. That important problem doesn’t have good solutions, and much of the effort in this field has focused either on weather predictions within a few weeks or months or on long-term climate simulations stretching decades.

Now that he has completed his Ph.D., Toms is launching a startup company, Intersphere, because he thinks that could allow these predictive weather and climate models to have the greatest impact on society. He’s already talking about the technology with potential investors and customers.

“The DOE CSGF really gave me the freedom to think about ideas that I wanted to pursue with machine learning and geosciences,” he says. “It would have been much harder for me to learn about machine learning really quickly without that practicum experience.”

Toms still chases storms in his spare time, driving to the plains each spring to watch tornadoes and other big weather.