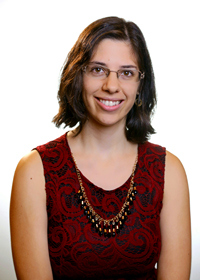 Anya Katsevich says her favorite mathematics problems tackle probability in random dynamical systems, but there was nothing improbable or random about her pursuit the subject.

The Department of Energy Computational Science Graduate Fellowship (DOE CSGF) recipient grew up immersed in numbers. Her father, a Russian émigré, earned his math Ph.D. from Kansas State University and now is a professor at the University of Central Florida.

For Katsevich, now a New York University doctoral candidate, the field encourages creativity. “It’s not enough to understand a problem on a formal level, like what the equations are saying.” It’s necessary to have an intuitive feeling. “I really like developing this understanding of, fundamentally, what’s going on.”

Katsevich’s theoretical approach focuses mainly on developing techniques, but her two main projects have real-life ramifications. The first relates to how atoms attach to substrates to produce thin films, like those used in semiconductors and solar-energy cells. Manufacturers must understand this process to optimize production.

The problem seemed straightforward when Katsevich began working on it with Jeremy Marzuola as a University of North Carolina at Chapel Hill undergraduate. She sought an accurate model of the microscopic-level mechanics that focus on discrete particles as a foundation for a more manageable macroscopic model that treats them as a continuum.

As they diffuse, Katsevich says, the atoms seek equilibrium – an energetic steady state. Her task was to devise an equation that zooms out to describe evolution toward equilibrium macroscopically.

But “there was this unexpected phenomenon,” complicating the picture, Katsevich says. Most such calculations assume the molecular system reaches local equilibrium, with the entire surface still in flux but behaving as if at rest in specific regions. Such states are typically characterized by a probability distribution with a certain kind of structure. Katsevich’s simulations show that equations based on this structural assumption portray the dynamics incompletely. The surface may have “the trademark features of an equilibrium system locally, but the distribution of particles is in a slightly different kind of equilibrium state” than usual.

Katsevich planned to derive the macroscopic equations using her preferred methods, then simulate the system to validate them and compare their predictions with experiments. The system’s unexpected behavior, however, means she only recently formulated the equations.

Katsevich’s other main project, with NYU advisor Afonso Bandeira, relates to cryogenic electron microscopy (cryo-EM), a means of imaging molecules, frozen at extreme temperatures, at the atomic level. The pictures are noisy – obfuscated by meaningless information – and the molecules may lie in various unknown orientations in relation to the microscope, making them difficult to quantify.

The data emerge as a Gaussian mixture model: signals of interest, each cast as a classic bell-shaped curve, but merged so they obscure each other. Each image can be thought of as a random draw from one of the population clusters containing all the noisy versions of the molecule in a certain orientation. The goal is to find the center point – the most likely version – in each cluster.

Katsevich and Bandeira use data about the distributions to calculate a function gauging how close guesses about the center’s value are to the real value. Expectation maximization (EM), the method Katsevich uses, maximizes this function.

Algorithms for such problems search the possible parameter values for the optimal one, like a hiker exploring a landscape in search of the lowest valley while avoiding false basins. “It’s hard to analyze it directly, but you want to know what the landscape looks like” to start the search closer to the actual value. In a paper posted on line in June 2020, Katsevich and Bandeira describe a technique to characterize this parameter landscape.

Katsevich tried out an applied use of HPC and math during her 2019 Los Alamos National Laboratory practicum. With Yury Maximov and Michael Chertkov, she studied random inputs to power grids, such as variable energy from renewable sources, and in microgrids, in which few users lead to unpredictable needs. In each situation, system operators face challenges in balancing supply and demand, leading to possible overloads or brownouts. Using the theory of rare events in dynamic systems and rare events sampling in static models, Katsevich modeled and monitored the probability that energy fluctuations endanger grid stability.

Normally Katsevich is interested in “math for math’s sake,” but the practicum “got me more excited about applying my work to real physical systems.” She hopes to take up the project again as she has time.

It could happen sometime in the next two years, before Katsevich’s expected 2022 graduation. She expects to take a postdoctoral research post before entering academia.

Image caption: Gaussian mixture models at different noise levels. In cryo-EM data, the noise is large (right). Points of the same color represent noisy images of the molecule in the same orientation. The high noise level makes it difficult to group images based on molecule orientation. Credit: Anya Katsevich.