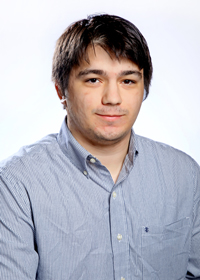 As a Lehigh University undergraduate, Andres Salcedo initially hoped to land a mathematics summer research position, but instead went to Vanderbilt University to study physics with Andreas Berlind.

That experience “determined what I would work on until now, basically,” says Salcedo, a Department of Energy Computational Science Graduate Fellowship (DOE CSGF) recipient. It also led him to David Weinberg, his advisor at Ohio State University, where Salcedo is pursuing a doctorate in astronomy.

What fascinated Salcedo then and today is cosmology, the study of the universe’s origin and evolution – particularly dark matter and dark energy. The first is unseen but interacts gravitationally with visible matter. It’s why galaxies that, mathematically, should fly apart don’t: Gravity from surrounding dark matter holds them together. Dark energy, meanwhile, is what astronomers think fuels the universe’s accelerated expansion.

“We’re interested in understanding anything we can about the properties of dark matter – how much there is and the extent to which it has formed into structures,” Salcedo says.

With no way to see dark matter, astronomers rely on visible markers of its presence. Salcedo compares it to a satellite image of the Earth’s surface at night: Concentrations of lights indicate that humans are present, but the people themselves aren’t visible. How the lights are distributed gives some indication of the underlying population’s structure – but it’s not entirely reliable.

For Salcedo and Weinberg, galaxies and galaxy clusters, the universe’s largest gravitationally bound structures, trace the unseen dark matter halos that hold them together. “We have to construct models that connect the visible matter to the underlying dark matter” and correspond to night-sky observations, Salcedo says. They’re particularly interested in factors that influence how fast dark matter structure grows.

Salcedo collaborates with researchers who simulate dark matter distribution and structure. “What I have to do is construct models that paint the galaxies and the galaxy clusters onto those simulations,” helping narrow parameters that govern how many of the visible objects appear and where.

In a web-posted paper, Salcedo, Weinberg and colleagues investigated potential constraints on parameters for dark matter structure models by combining several types of data, including observations of weak gravitational lensing, in which galaxy clusters’ mass distorts light from objects behind them. Their method was able to limit expected uncertainty in dark matter clustering predictions to as low as 0.8 percent, depending on conditions.

Salcedo also has studied the sources of assembly bias, factors that influence simulated dark matter halo clustering. Linear theory approaches, for instance, predict that how halos cluster depends on their mass alone. Simulations, however, found that within a set of similarly sized halos, other dependencies come into play, including age: older halos are more clustered.

Salcedo’s research suggests that a halo’s proximity to a massive neighbor halo drives much of assembly bias. Such nearby structures can steal mass from the subject halo, affecting estimates of its age and its assembly history. Controlling for such factors in models reduced or eliminated assembly bias.

Salcedo has run most of his calculations at the Ohio Supercomputer Center system. He tapped bigger machines for his 2017 Argonne National Laboratory practicum, where he worked on a project tied to his doctoral research.

With computational physicist Salman Habib and postdoctoral researcher Lindsey Bleem, Salcedo worked on modeling the spatial distribution of galaxies using cosmological simulation results and data from the Dark Energy Survey (DES), a DOE-supported project to map galaxies and cosmic structure. Salcedo wrote a halo occupation distribution code that placed model galaxies into simulated dark matter halos. With additional calculations, he fit the model to DES data from a sample of galaxies chosen for their luminosity and precisely measured distances from Earth.

An algorithm called redMaGiC automatically selects the galaxies based on their color data. Though the code produces good estimates of galaxy distance, it has strange effects on galaxy-halo connection models, Salcedo says. His project was to help calculate modeling requirements and constrain parameters for the best results. “There’s a good chance that the galaxies I’ll use in the analysis for my thesis will be redMaGiC galaxies,” Salcedo says, so his work at Argonne is important to finishing that research.

That thesis work should carry Salcedo through spring or summer 2021, when he’ll graduate and seek postdoctoral posts before finding an academic position in astronomy.

Image caption: Panels showing particle (top), halo (middle) and galaxy (bottom) distributions from a simulation Andres Salcedo uses in his research. Each shows a slice from a simulation snapshot with a side length of approximately 5.3 billion light years. Cosmology, the evolved structure of matter in the universe, determines particle distribution in the top panel. The middle panel shows halos, comprised of particles, which host galaxies. Astronomers can’t directly observe either halos or particles in the underlying dark matter distribution. The bottom panel shows the observable galaxies, which can be used to constrain cosmology, painted onto the halos to align with models that determine galaxy-halo connections. Credit: Andres Salcedo.