Alumna Brenda Rubenstein is One of the Talented Twelve

Alumna Brenda Rubenstein is One of the Talented Twelve 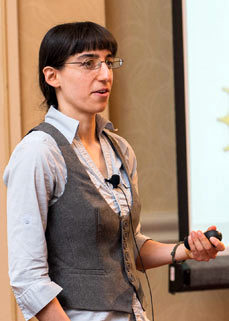 A former Department of Energy Computational Science Graduate Fellowship recipient is one of the 2019 Talented Twelve, chosen by the trade magazine Chemical & Engineering News.

Brenda Rubenstein, a fellow from 2008 to 2012, was chosen for her theoretical chemistry research at Brown University, where she is an assistant professor of chemistry. The Talented Twelve highlights the work of “path-paving young scientists tackling the world’s toughest problems with clever chemistry,” says the magazine, which the American Chemical Society publishes.

Rubenstein researches refining Monte Carlo methods for modeling chemical reactions at the quantum mechanical level, potentially helping scientists develop improved superconductors, batteries and more. Monte Carlo methods manage the huge scale of modeling quantum-mechanical interactions between atoms and electrons by sampling from probable combinations of variables. Rubenstein has helped adapt methods commonly used in physics for use in chemistry and is extending them to ever-larger systems of atoms.

In a new project, Rubenstein and her colleagues are probing chemical computers that would replace transistors engraved on silicon with chemical combinations that store information and perform calculations.

Rubenstein earned her doctorate in chemical physics from Columbia University in 2013. She served practicums at Lawrence Livermore and Los Alamos national laboratories.