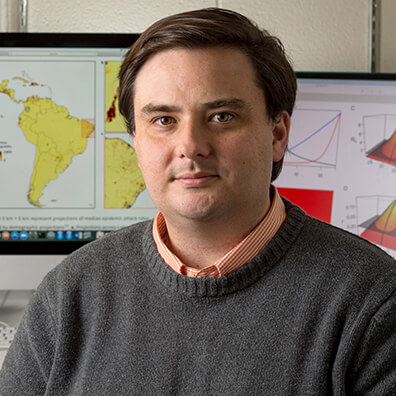 Research from a team that a Department of Energy Computational Science Graduate Fellowship (DOE CSGF) alumnus heads estimates that the novel corona virus SARS-CoV-2 may have infected as many 53,000 Americans by mid-March.

Alex Perkins, Eck Family assistant professor of infectious disease epidemiology and population biology at the University of Notre Dame, and colleagues based their calculations on U.S. data and information on outbreaks in China and Singapore. In a paper posted on the medRxiv scientific paper preprint website, they assert that there were likely almost 23,000 actual cases by March 12. The estimates, however, ranged from a low of 7,451 to a high of 53,044.

An article on the Gizmodo website noted that other researchers also are attempting to estimate actual infections. One group from the University of Massachusetts Amherst reported a median estimate of 53,000 infections, similar to the Perkins group’s direst approximation. Neither study has yet undergone peer review to help validate its methods and conclusions.

In an article on the Popular Science website, Perkins said forecasts that COVID-19 cases will wane in a few months probably are accurate – but depend upon how Americans react to the pandemic.

“I think it really is a combination of population immunity and how quickly that develops … but also what steps people are taking to prevent themselves from getting infected and how long those behaviors and other adjustments are in place,” he told the magazine. “But realistically, I don’t think it’s ever going to go away completely. I think there’s going to be a continual risk of this for a long time.”

Perkins, a fellow from 2007-2011, received his Ph.D. in population biology from the University of California, Davis.