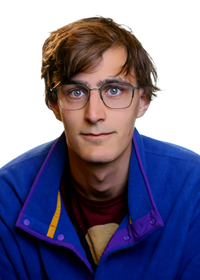 A computer model developed by a Department of Energy Computational Science Graduate Fellowship (DOE CSGF) alumnus and his colleagues can build realistic models of the complex patterns seen in insect wings.

The code, developed by Jordan Hoffmann and others, could be help study the evolution of wing structure and other patterned shapes, his doctoral advisor, Christopher Rycroft, said in a Harvard University news story. Their research was published recently in Proceedings of the National Academy of Sciences.

Insect wings, such as those from the fruit fly Drosophila melanogaster, a common model organism, are highly complex and may even be unique among individuals, like a fingerprint. Scientists have studied them as an example of signals within tissues that can generate precise, reproducible patterns, the paper’s abstract states.

To build the model, Kathy Li, then an undergraduate research assistant, collected more than 500 specimens of dragonflies and damselflies from 215 different species from entomology classes, illustrations and databases. She then produced two-dimensional images of each.

Using that information, the researchers segmented the polygonal forms the wing veins made. “We wanted to take this complex shape and turn it into something simpler so we could ask specific questions and compare its geometry across species,” Hoffmann said in the Harvard release. “We looked at the geometric properties of these individual shapes, which we called domains. We looked at how elongated each domain was, how many sides it had, how it touched its neighbors.”

The researchers’ model suggests that an inhibitory signal diffuses from random zones between the veins, repelling each other and preventing secondary veins from growing in certain areas. “As the wing grows and stretches during development, those zones could form the complex geometries of the wing as the veins grew around them,” the release said. When researchers tested the model on insect species it generated lifelike wing reproductions.

Hoffmann was a fellow from 2014 to 2018. He received undergraduate degrees in physics and mathematics from Johns Hopkins University.